The Guernsey National Show kicked off on the Tuesday evening with the Handling and Calf classes.

There were 5 Young members taking part in the Handling classes. These classes were sponsored by Crediton Milling Company and Quality Milk Producers. Our competitors were parading in the Any Other Dairy Breed Section and in the 16 to 20 age group, Abi Marshall was placed 1st Guernsey Showman with Michael Dawes second and Shannnon Dawes 3rd.

In the 12 to 15 age group, Hannah Garrett was our only entrant. In the 11 to 7 category, Rosa Brown represented the Breed. 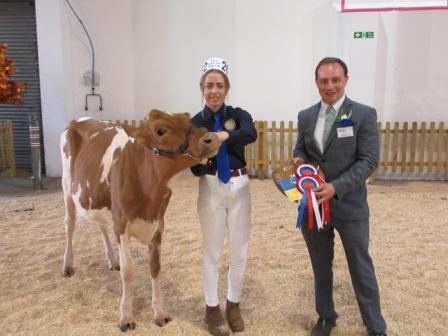 Abi Marshall with judge Will Slade.

There were six calves entered in the Any Other Dairy Breed Classes that were sponsored by The Cornwall, Devon and Wessex Guernsey Clubs and Top Placed Guernsey in the calf born on or after 1st Jan 2019 was Edgehill Lady’s Man Freda 2 from Michael Dawes. Second was Latifa Brogdon Rolo from Caroline and Mike Moody and Richard Norman’s Je’Taime Lambeau Peggy 2 was 3rd.

There were two calves in the calf born from 1st July 2018 to 30th Sept 2018 and First place went to Emma Greenslade’s, Greensfield Dollars Diana with Michael Dawes’ Edgehill Ernie Violet second. These two calves went on the be named Champion and Reserve champion Guernsey Calf. 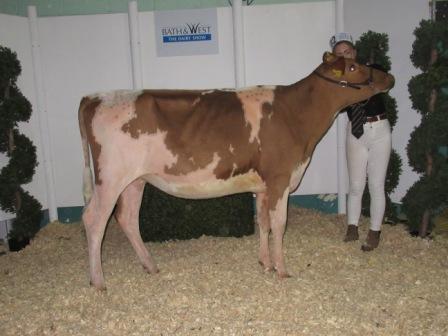 Judging the Guernsey classes on the Wednesday morning, was Mr Iwan Thomas who had 18 cattle from 8 exhibitors to inspect.

Here are the results in full.

Starting the day with the young stock classes, with 3 forward in the Maiden Heifer class, the winner came in the form of a beautifully balanced heifer, with great strength through the chest and depth of body and rump structure. The overall balance, thurl position and locomotion taking her over the second. Second edged out third with her added strength and length taking her over the young dairy heifer in third. 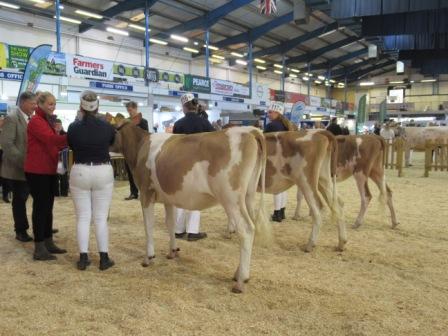 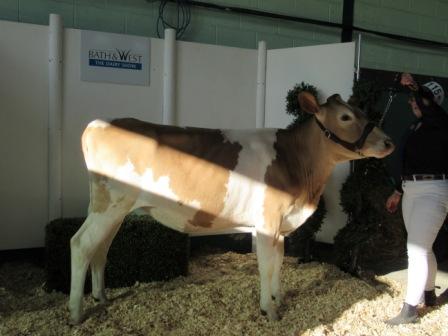 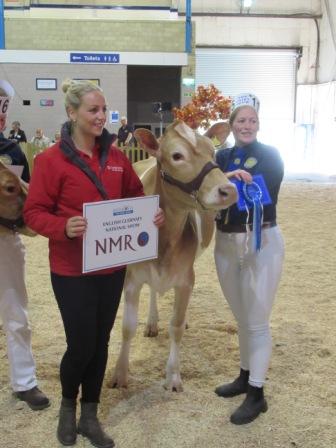 Sponsor of the Class, Leanne Pitman of Cornish Mutual presenting the prize to Tracey Hooper.

The in calf heifers brought forward some beautiful heifers, but in going for the shortest bred heifer, I felt she possessed exceptional balance and edged over the second for her extra balance and femininity through her greater length of head and neck. Second advanced over third being a closer typed heifer to my leader, cleaner through the spine and bone quality over the exceptionally well grown heifer in third. 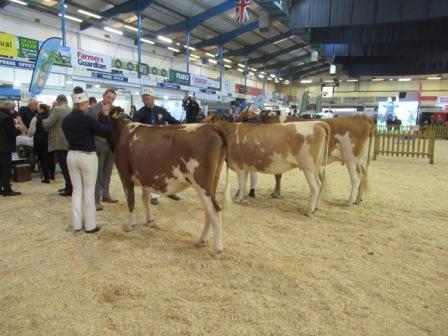 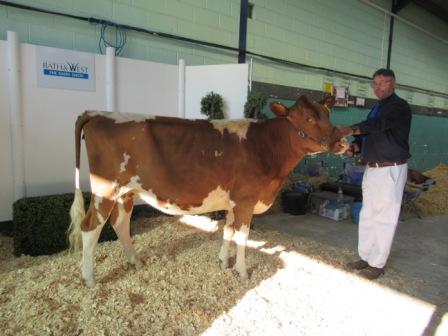 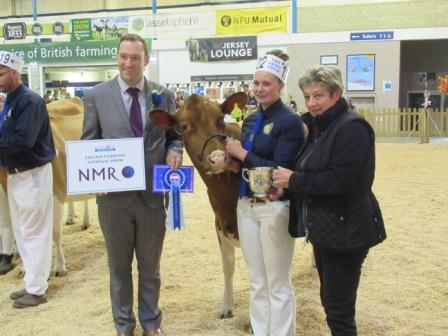 The heifers in milk brought some true class, with the top 3 heifers oozing dairy quality, but in the leader I found a heifer that was superbly well balanced, with bucket loads of style and quality throughout, dairyness from head to tail, with a phenomenal udder, with her added strength through the chine and higher and wider rear udder and teat position taking her over the second. Second stood over third with her slight advantage for length, her better width of rump and snugger udder. Third again a heifer that had a tremendous dairy frame, being wider through the chest, deeper and more open in the rib and better attached with better bloom of udder than fourth. 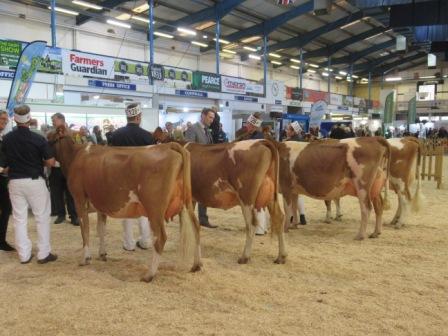 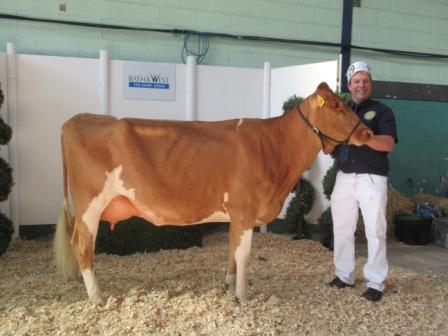 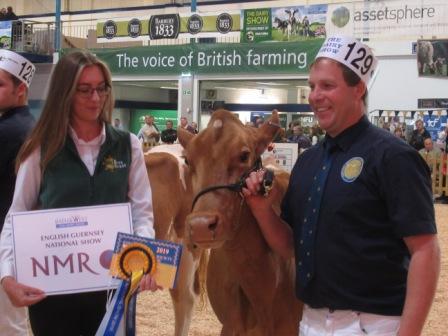 Sponsor of this class Hannah Smith from UK Service Sires presenting the prize to James Warren.

The next class to grace the ring was the second calvers with two contrasting cows, coming to the fore, a dairy machine and a real powerhouse. the leader exuded dairyness throughout, she edged the win over her class mate for her snugness of udder, strength of ligament and cleanliness of bone, whilst the powerful cow in second, edged into second for her tremendous strength of front end, especially through the chine and her body capacity throughout over the third place. 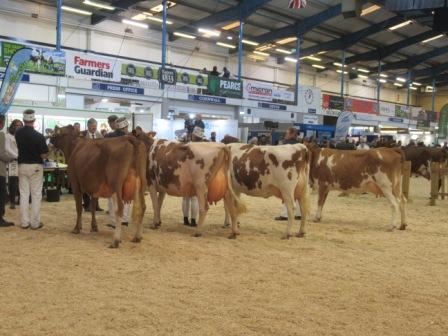 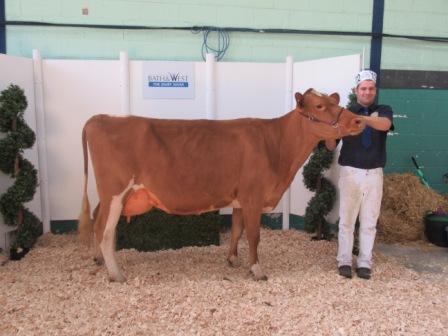 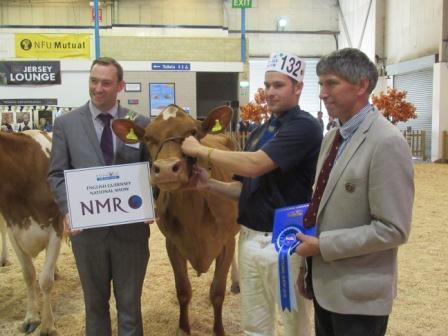 The third calvers also saw a great contrast of cows at the top, the leader being powerful and deep, if a little staler, second ultra dairy, but a little fresh. The leader took the advantage in the strength of front end, depth of body and definition of udder cleft, whilst the second had super bone quality and moved well on her legs and feet. 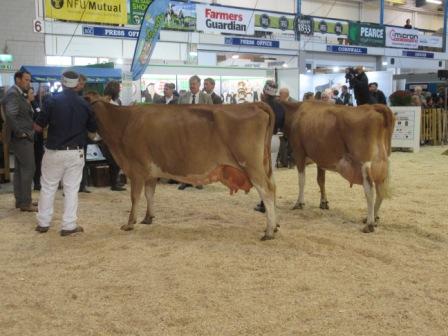 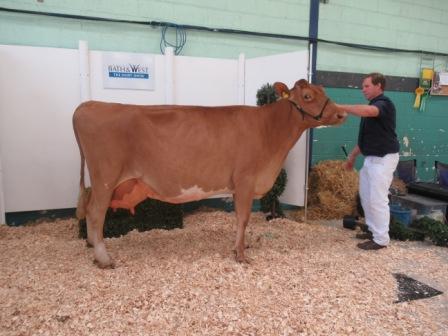 In the mature cows, my leader came in the form of the stronger cow in the class, wide through the chest and deep bodied with tremendous width of rump, her overall width throughout and capacity meaning she moved above the beautifully balanced dairy cow in second, a cow that had great bone quality and udder texture. 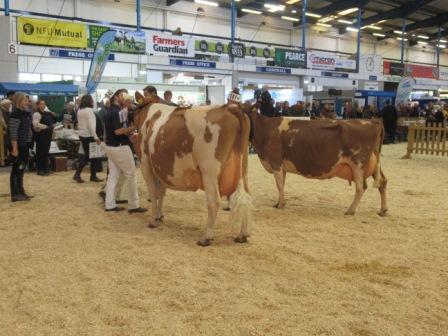 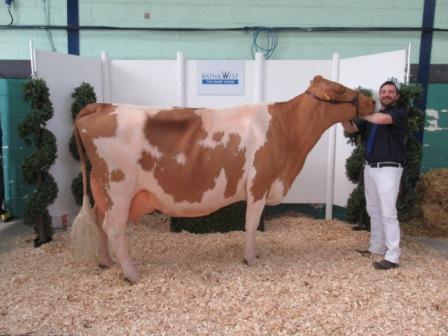 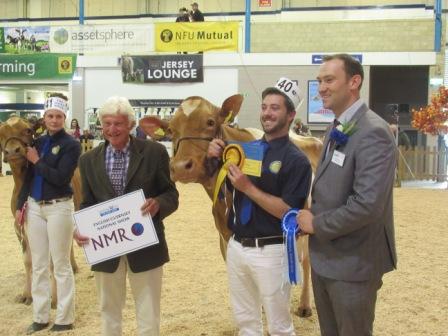 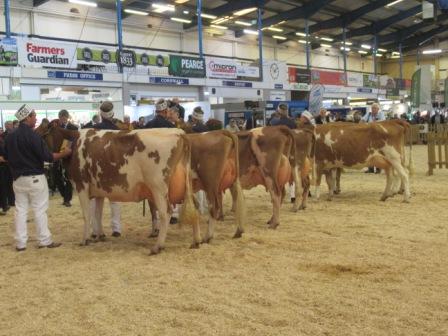 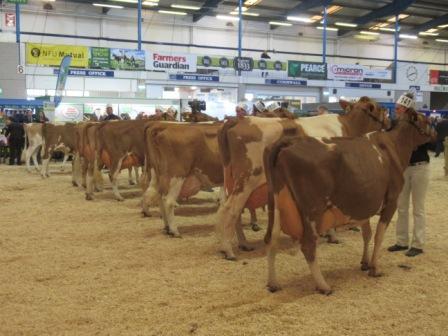 Fantastic Line up of animals in the Championship finale.

With the Grand Championship upon me, it was great to see the quality of entries that had come to the fore, and selecting my top 5, I was extremely satisfied to see the great duo of leading heifers, the wonderful pair of second calvers and the senior cow looking so well in the final line up, but there can only be one winner selected and the two year old that had caught my eye from the early part of the day was a superb representative of the breed to tap out as Champion, her fantastic udder having brought her to the fore, with the two second calvers following her in being the same dairy frames and dairy character throughout, for Reserve and Hon Mention. 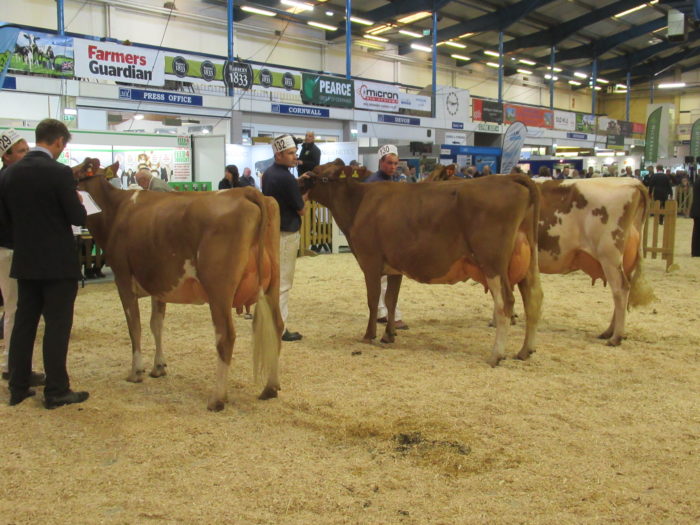 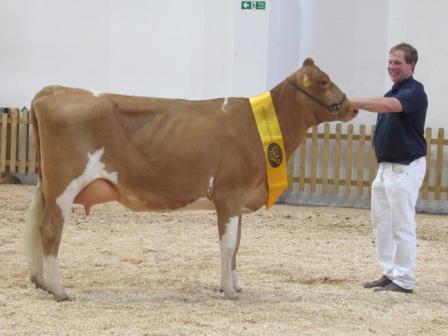 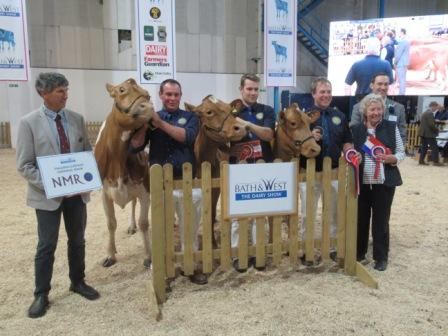 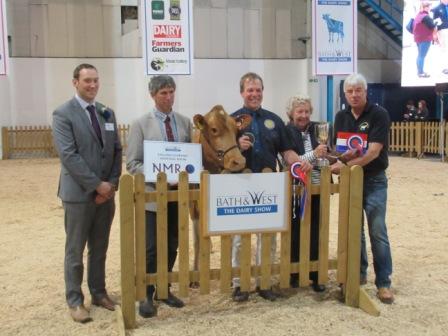 Once again we gratefully thank our sponsors for their continued support of the Guernsey classes at The Dairy Show.

A big thank you to all exhibitors and their helpers for their commitment to the Show and to our Stewards Colin Gleed and Lesley Durbin for giving up their time to run the classes so smoothly.